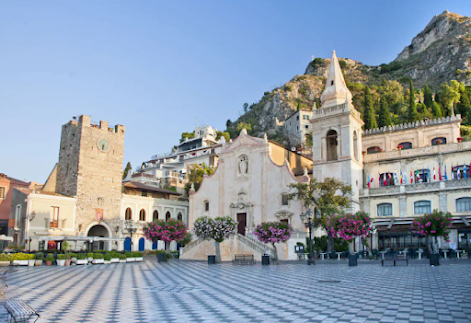 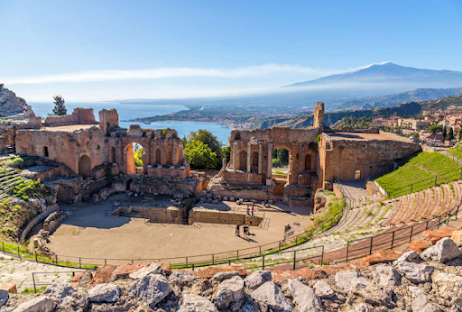 Teatro Greco
TAORMINA
SICILY
WHAT to SEE in TAORMINA

Today, Taormina lives on tourism. Visitors flock from all over the world to see its Greek-Roman theatre, amble along its perfectly preserved Mediaeval streets, admire its dramatic views of Mount Etna, and immerse themselves in the archetypal Mediterranean atmosphere.

The main attraction is, without a doubt, the theatre. Now home to all manner of events, including plays, fashion shows, concerts, and cinema festivals, the Teatro Greco, as its name suggests, started its life in the 3rd Century BC hosting performances of works by Aeschylus, Sophocles, Euripides and Aristophanes. Originally quite small, it was enlarged by the Romans to accommodate their own particular brand of theatrical extravaganza. The views from the theatre are spectacular, taking in a (usually) smoking Mount Etna and the Bay of Naxos down below.

Another testimony of Taormina’s ancient origins is the Odeon. Right in the middle of the old Roman town, just below Palazzo Corvaja, this small theatre was built by the Romans when the town became a military colony in 21 BCE. It was used both for theatrical and musical performances organised for the cream of local society. Strangely, at some point it disappeared, only to resurface again in 1892 when a blacksmith hit upon something that turned out to be red bricks while digging his land. He dug a little deeper and called in the experts who uncovered first the cavea, then the orchestra and finally the scene.

Taormina is centred around its main thoroughfare, Corso Umberto I. At the beginning of this charming street is perhaps the greatest symbol of Taormina’s long varied history: Palazzo Corvaja. Its architecture is a sublime mix of Arab, Norman and Gothic and includes battlements, mullioned windows and shady courtyards. The Arabs built the original tower as part of the town’s defences. Its cubic structure, which is typical of many Arab towers of this period, is thought to have evoked that of the Ka’aba in Mecca. In the 13th Century, the tower was enlarged by the Normans who added a wing containing a hall and some wonderful artwork. The Spanish followed suit, adding another wing at the beginning of the 15th Century to house the Sicilian Parliament. Its present name recalls one of the town’s most important noble families who owned the building from 1538 to 1945.

For the first half of the 20th Century, until after the 2nd World War, Palazzo Corvaja became a kind of lodging house for poor families and fell into disrepair. After the war, it was restored to its former glory and in 1960 another section was added to house the local tourism offices. The main part now houses the Sicilian Museum of Art and Popular Traditions.

At the other end of Corso Umberto I is Piazza del Duomo, complete with 13th-century Cathedral and Baroque fountain. As with many churches of this period in Sicily, the Duomo, dedicated to St Nicholas of Bari, has a distinctly fortress-like quality thanks to its robust structure and the battlements that delineate the roof. Its Renaissance doorway belies an essentially Gothic interior complete with a rose window at the west end.

Taormina is served by its very own cable car which ferries tourists to and from the seaside resorts down along the coast. Extensive beaches, rocky coves, tiny islands (such as the famous Isola Bella) and sea stacks abound, making this enchanting coastline a firm favourite with Sicilians and visitors alike.

THINGS to Do in TOARMIN, Mt ETNA, SICILY
Click for INFO 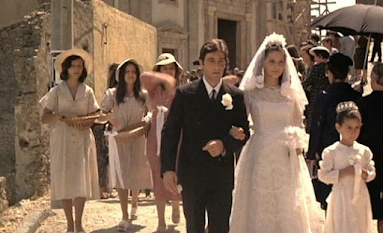 GET on The  GODFATHER Movie SICILIAN TOUR & LUNCH
From TAORMINA, SICILY
Info & Reservations 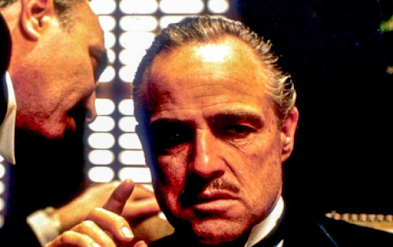 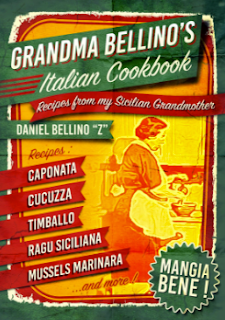 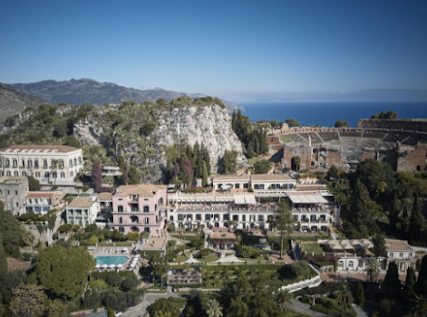 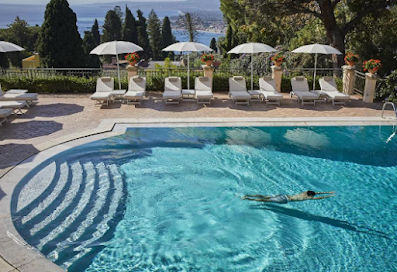 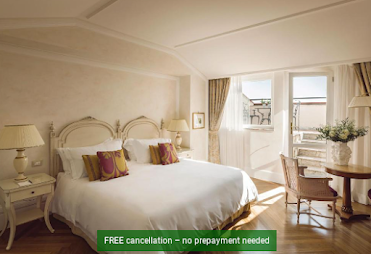 Taormina’s , Grand Hotel Timeo, A Belmond Hotel, Taormina is opposite the Greek Theater and offers panoramic views of Mount Etna and the Sicilian Coast. It features an outdoor pool and spa.

Rooms at Grand Hotel Timeo, A Belmond Hotel, Taormina are all air conditioned and offer, satellite TV, mini-bar, private bathroom and free Wi-Fi. Some rooms have views of the sea or the hotel gardens with magnolias, cypress and palm trees.

Grand Hotel Timeo, A Belmond Hotel, Taormina is 3.1 mi from the Taormina-Giardini Naxos Train Station and 45 minutes’ drive from Catania Airport. Private transfers can be arranged to and from the airport and train station.

Couples in particular like the location – they rated it 9.9 for a two-person trip. 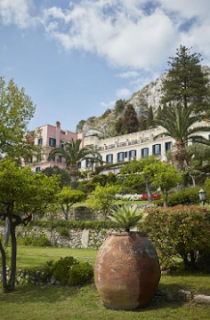 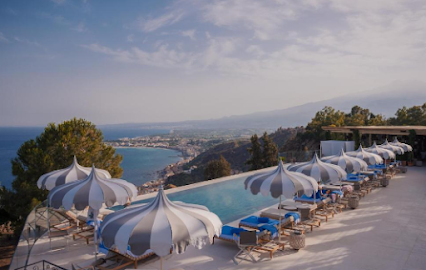 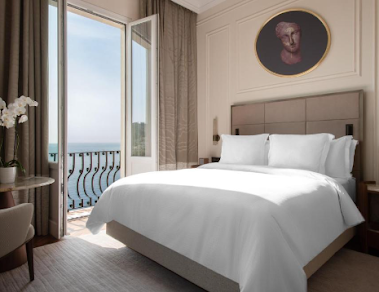 San Domenico Palace, Taormina, A Four Seasons Hotel a unique hotel, with terraces overlooking Mount Etna and the Bay of Taormina. It features a fitness center, a beauty corner, and an outdoor swimming pool.

This luxury hotel in Taormina consists of 2 historic buildings. The Garden Wing is a former 15th-century convent with cloister. The Grand Hotel Wing was added in 1896.

All rooms are uniquely decorated, and equipped with air conditioning and TV with satellite channels. Most rooms offer views of the sea, and some also have a private balcony.

Mentioned in the most famous food guides, the restaurants and bars of the hotel serve traditional Sicilian cuisine. Breakfast buffet is served at the restaurant and includes local pastries.

Couples in particular like the location – they rated it 9.9 for a two-person trip. 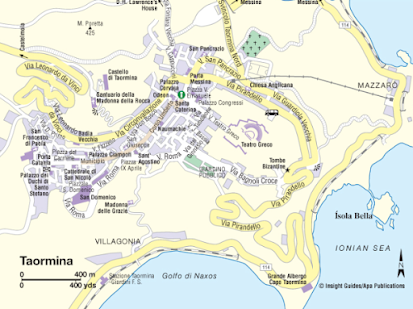 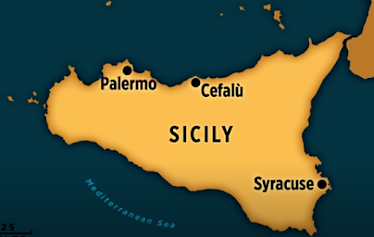 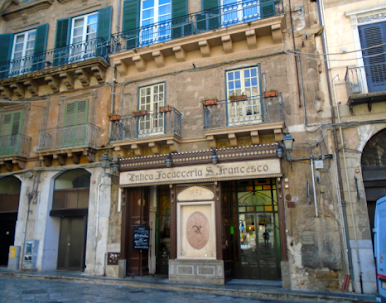 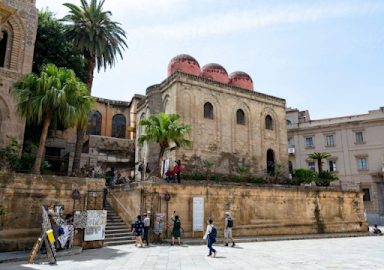 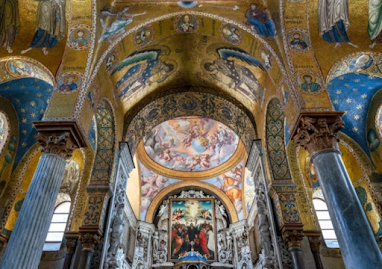 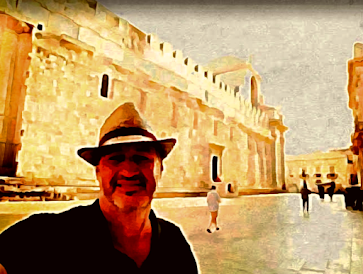