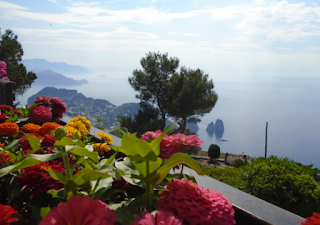 CAPRI
From Summit of MONTE SOLARO
MY CAPRI
I first started gong to Capri in the Summer of 1986. I was a young man in my early 20s, and travel was so much different than it is now. First off, there was no internet back then, No Expedia, no Booking.com , to check out info on anything or anyplace, no Whatsapp to send text and talk on the phone for Free anywhere in the World. You couldn’t look up and buy Airline Tickets by yourself, you had to go through a Travel Agent, or purchase a plane ticket directly from the airline. You only info came from your own personal research from books and magazine articles, past experiences, and advice and info from friends.
Back then in 1986 and before, most people if they were traveling to Italy, to Capri, or anywhere in the World would buy Travel Guide Books, like Baedekers, Fodors, Frommer Guides, and any number of Travel Guide Books available at the time. Rick Steves was just starting out back then, and I did buy his Europe Through The Back Door guide book, along with Europe on $40 a Day, which was my main source at the time. When it came to finding accommodations. Typically, for any place that you were traveling too : Rome, Paris, etc., there would be info on the main attractions to see, how to get around, restaurant suggestions, and a list of hotel accommodations in 3 price categories : of Budget Hotels, Moderate Priced, and Luxury Hotels.
With my Frommer’s Guide in had, on this my second trip to Italy, I got my hotel in Rome from the Frommer’s recommendation, and I looked up budget hotels in Capri. There was I think only 2 under the budget range as I recall. I picked the Villa Tosca at $40 a night. So they way I did it back then, I had my list of budget , I get into town, and either go to the property or give them a call from a cafe or on a payphone somewhere, when I got to my destination.
So the first time I went to Capri, I took the ferry boat, and when I arrived in Marina Grande, Capri, and got off the boat, and walked down the dock, and once I came across a payphone, I gave them a call at Villa Tosca. I asked if they had any rooms available? They did. They asked me where I was. I told them that I had juts gotten off the ferry boat and was down by the port. They told me to take the Funicular up to Capritown, and when I got off, just walk straithgt through the Piazza and then down toward the Hotel Quisisana The hotel was behind the Quisisana. Just walk the alleyway alongside the hotel and I would come across a sign that pointed to the Villa Tosca. And so I did.
When I got off of the Funicular, I spotted a cute little Lemonade Stand (Lemon Granita). It was hot out, and I couldn’t resist. I got a Lemonade. Best Lemonade I’ve ever had. It was cold and refreshing, and I Loved it. The Lemonade Stand is still there in the Piazzetta. The only difference is that instead of less than a dollar for a Lemonade, the now (2022) cost a Whopping $5 ..
I walked down toward the Quisisana. It came into view. A beautiful Grand Old Hotel. I walked down the pathway, and right before the Via Augustus. I saw the sign and followed the pathway. I came to it, Villa Tosca, which back then was a simple pensione. Today it is no longer called Villa Tosca. It is owned by the same family, but a few years back, the son turned it into a nice little boutique hotel and changed the name to “La Tosca” (hotel).  I gave them my Passport, then checked into my room. It was late afternoon. I left Rome in the morning, bound for Naples Central Station. I arrived about 3 hours later. I walked outside the train station, and found the bus that went to the Porto. I hopped on, and arrived about 15 minutes later. Got on the ferry and went to Capri, and now I’m at my little hotel. I took a shower, got dressed and went out. I had seen the Faraglioni from my balcony. I went out on the main terrazzo of the hotel and just starred at them. The Faraglioni were beckining my to them, and I just started walking toward them. The walk along the Via Tragara was gorgeous. I passed all the beautiful villas along the way. Villas owned by Valentino, Armani, Sophia Loren and others with the means to own them. I loved it. When I got down to the end of the Via Tragara, I saw another Lemonade Stand. I got one. This little old lemonade stand is still there. Same story, a Lemonade has gone from $1 to 5. I could see the Faraglioni. They were Gorgeous. I walked down the path, getting one beautiful view after the other. I was mesmerized. One of the most beautiful sights of my life. I walked all the way down, taking pictures along the way.
Daniel Bellino Zwicke
to be Continued 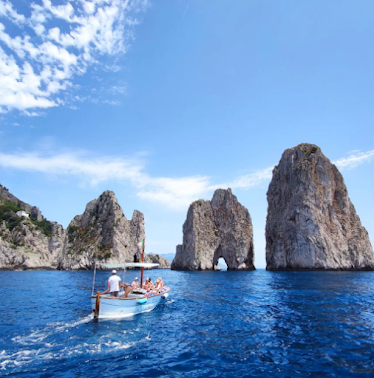 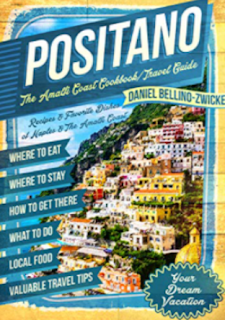 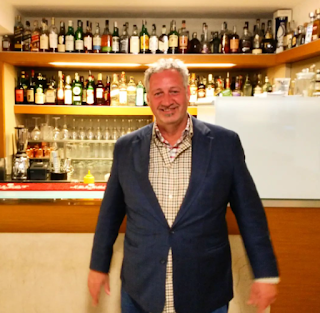 FIND a ROOM in CAPRI
BOOKING.com